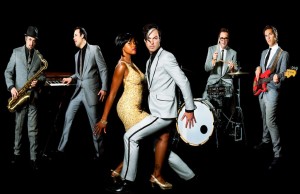 What do you get with six talented musicians, irresistible songs and soul…Fitz and The Tantrums! I love and enjoy the music produced by Fitz and The Tantrums. Their debut album Pickin’ Up the Pieces and EP Songs For a Break Up were released early 2011. The band consists of six musicians Fitz the lead vocalist, a co-vocalist, saxophone/ flute, bass, drums, and keyboards players. They have a unique sound; their music genre could be a mix of alternative and pop, along with a soulful 60s old school but up beat sound. Their songs are catchy and fun, and from viewing interviews and performances they like to engage with their audience and overall for everyone to have a good time and enjoy their great music. From their first show in 2008 touring with Maroon 5, along with several of their shows of their own, Fitz and The Tantrums will be touring in the near spring through summer seasons.

Pickin’ Up the Pieces and EP Songz For A Break Up are available on Itunes now.

Here’s a video from one of the singles on Pickin’ Up the Pieces: Fitz and The Tantrums- Money Grabber